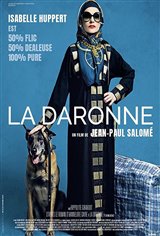 Patience (Isabelle Huppert), a seasoned Franco-Arab translator for the Paris narcotics squad, has struggled to make ends meet ever since she had her sick mother admitted to a private residence. By monitoring with fellow police officers the evolution of a major drug delivery from Morocco, she manages to identify one of the traffickers as the son of her mother’s favorite nurse. Hiding this information from the head of the brigade, Patience has a ton and a half of Moroccan hashish diverted, taking possession of it the next day. Intoxicated by her good fortune, she dons a disguise and hires small dealers to sell the merchandise in Paris. At the narcotics headquarters, her colleagues don't suspect anything, but on the streets, this new drug godmother, wrapped in sumptuous caftans and hijabs, is given with the nickname "La Daronne," a.k.a. “Mama.”