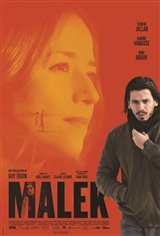 Malek, a Lebanese man living in Montreal, has attempted suicide. Genevieve, a psychologist, is struggling to break through the wall of his silence, the consequence of a terrible event in his home country that involved his beloved sister.

Unemployed, living on social assistance, Malek hangs out at parties, where he wins the affections of a young Iranian woman named Shohreh. Emboldened by his victory in love, the young man gets a job at a Persian restaurant. Putting his trust in Shohreh and Genevieve, he finally agrees to confront the demons of his past.