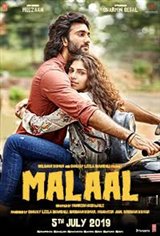 "Malaal" is the story of Shiva and Astha, two different people from contrasting backgrounds, who experience the innocence of Love. Unruly but free spirited in nature, Shiva grew up in the chawls of Mumbai where he meets, Astha the love of his life.

Due to a personal tragedy she moved into the chawl with her family and soon became a part of the local environment.While Astha's popularity in the chawl grew, her fondness for shiva also increased. Their interaction was never smooth, and life too had different plans for them. While they argued and fought, they also missed each other's company when alone.

Confused about these entangled emotions, they didn't know if it was love yet. Does their love find its destination or do they part ways? forms the essence of this romantic drama.