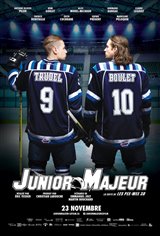 Five years after their team's victory at the Pee-Wee Tournament, star players Janeau Trudel and Joey Boulet join the Chicoutimi Saguenéens in the Quebec Junior Hockey League. During an evening of drinking, Janeau swerves at the wheel of Joey's pickup truck. When the police arrive, he panics and pushes his completely drunk friend into the driver’s seat.

Kicked off the team, Joey is forced to join the Rouyn-Noranda Huskies and go live with his father. The father and son, both struggling with alcoholism, make the decision to quit drinking. Meanwhile, guilt-ridden Janeau tries to redeem himself with Joey and his girlfriend Julie, who is also the daughter of his father's new wife.

Soon, the two players are called to compete on the rink in opposing teams, as NHL recruiters watch.