Love and Other Dilemmas 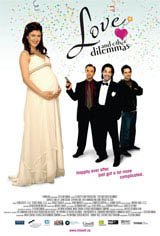 Once upon a time there was a Shapiro family curse. The wedding day curse struck anyone -- especially runaway grooms -- who interfered with a Shapiro bride being properly married, leaving them curiously dead, yet not dead. The ingredients of a proper wedding: the dress, the ring, the tux and a legal ceremony.

Today is Ginger Shapiro's wedding day, which finds her robbed, kidnapped and believing her fiancé is dead. But this doesn't mean the ceremony can't go on as planned. And at eight months pregnant and wearing heels, she's determined to do whatever it takes to ensure her happily ever after.

Henry, very much alive, is having a bad day of his own. He promised Ginger he'd quit gambling, but only managed to get around to it today. And though he's been prompt with his monthly payments to local mobster Bart Ladro, he's stunned to learn Bart has not decided to forgive the final $500. Henry can't get Ginger's wedding ring out of hock. And if that happens, Ginger will kill him.