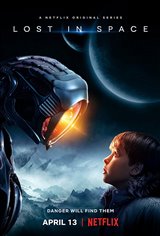 This 10-episode sci-fi series is a reboot of the popular 1960s TV series of the same name.

Set 30 years in the future, a geological-altering event on Earth has forced humanity to search for new planets, where they can form colonies. While on the way to a new planet where they can make a new life for themselves, the Robinson family's ship The Jupiter 2 is separated from the mothership and forced to crash land on a strange planet where they encounter many dangers.

John and Maureen Robinson (Toby Stephens, Molly Parker) and their children — Judy (Taylor Russell), Penny (Mina Sundwall), and Will (Max Jenkins) quickly realize they have to bond like never before in an effort to survive.