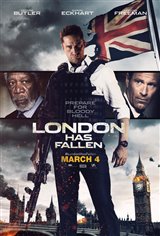 In this sequel to Olympus Has Fallen, Secret Service Agent Mike Banning (Gerard Butler) is in London for the British Prime Minister's funeral. The Prime Minister passed away under mysterious circumstances and all of the Western World's leaders are called to attend the funeral.

Mike discovers that what appears as a well-intentioned funeral service turns out to be a plot to assassinate all the attending world leaders. President of the United States Benjamin Asher (Aaron Eckhart), Banning and an English MI-6 agent are the only ones in the world who can stop the planned terrorist attack and protect the leaders from their potential assassination.