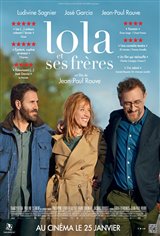 Lola, a divorce lawyer going through a break-up, has two brothers: Pierre, who works as a construction engineer, and Benoît, who’s getting married for the third time.

When Pierre keeps the wedding party waiting for hours due to his late arrival, then in his speech, he calls his new sister-in-law Sarah instead of Sandra, it creates tension with his new family member. Three months later, when the tension has subsided somewhat, Benoît invites Pierre and Lola to his home.

But when he learns the same evening that he’ll soon become a father, Benoît is less than thrilled, because he doesn’t feel ready, which again provokes Sandra's anger.

She decides to spend the night at Lola’s. Meanwhile, Pierre undergoes a painful professional setback, which he tries to hide from Lola and Benoît, as well as from his student son and his ex, whom he’s trying to win back.