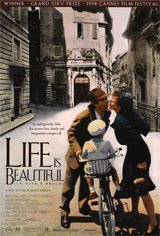 In 1939, Guido (Roberto Benigni) — an enchanting individual with childlike innocence and grand dreams of owning his own bookstore comes to the Tuscan town of Arezzo. He falls in love with Dora, a beautiful young schoolteacher (Nicoletta Braschi). Unfortunately, the woman he calls his “Princess” is already engaged. Worse, she is engaged to the local Fascist official with whom he has had a run-in. Guido, however, is not deterred and a fairy tale romance ensues.

Several years later Guido and Dora are married and have a son, and Guido has finally opened the bookshop of his dreams. But now, the occasional bigotries Guido once ignored have become Racial Laws with which he must come to terms. Throughout it all, he determines to shield his son from the brutal reality governing their lives. This determination becomes a matter of life and death when Guido and his son are sent to a concentration camp three months before the war’s end. Of her own accord, and out of her love for them, Dora deports herself on the same train.

Now, in this unimaginable world, Guido must use his bold imagination and every ounce of his indefatigable spirit to save those he loves.