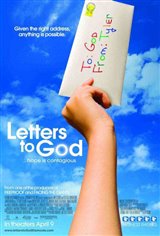 7 votes and 2 Reviews | Write a Review

A heartfelt tale of inspiration, hope and redemption, LETTERS TO GOD is the story of what happens when one boy's walk of faith crosses paths with one man's search for meaning—the resulting transformational journey touches the lives of everyone around them.

Tyler Doherty (Tanner Maguire) is an extraordinary eight-year-old boy. Surrounded by a loving family and community, and armed with the courage of his faith, he faces his daily battle against cancer with bravery and grace. To Tyler, God is a friend, a teacher and the ultimate pen pal—Tyler's prayers take the form of letters, which he composes and mails on a daily basis.

The letters find their way into the hands of Brady McDaniels (Jeffrey S.S. Johnson), a beleaguered postman standing at a crossroads in his life. At first, he is confused and conflicted over what to do with the letters. Over time he begins to form a friendship with the Doherty family—getting to know not just Tyler but his tough, tender yet overwhelmed mom (Robyn Lively), stalwart grandmother (Maree Cheatham) and teen brother Ben (Michale Christopher Bolten)—who are each trying to stand strong against the doubts that come with the chaotic turn their lives have taken.

Moved by Tyler's courage, Brady realizes what he must do with the letters, a surprise decision that will transform his heart and uplift his newfound friends and community—in an exhilarating act of testament to the contagious effect of one boy’s unwavering faith against the odds.

Inspired by a true story, LETTERS TO GOD is an intimate, moving and often funny story about the galvanizing effect one child's belief can have on his family, friends and community.