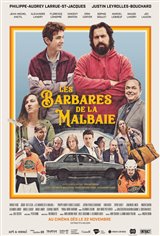 Jean-Philippe is a hockey devotee—he knows all the anecdotes and statistics by heart. The reserved teenager, who spends more time at the arena than at school, dreams of becoming a sports agent. His mother is less than thrilled by the idea, as is his boss at the local sporting goods store, who is hoping to keep Jean-Philippe on as his assistant. But JP has other plans in mind: to help his 30-year-old cousin return to the NHL. The athlete, due to his lack of discipline, was sent back to the amateur leagues, where he played for the team Barbares de La Malbaie. The first leg of this big comeback is to be held in Thunder Bay, where the Canadian Amateur Championship will be played.