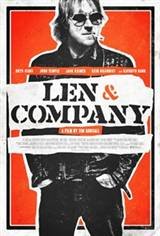 After having a meltdown on a globally televised awards show, wealthy, middle-aged music producer Len (Rhys Ifans) searches for solitude in his Upstate New York retreat. For a while, he successfully hides from the world. His only human interaction is with his neighbor's teenaged son, William (Keir Gilchrist). That is, until his own son Max (Jack Kilmer) and pop star Zoe (Juno Temple) show up.

Max, who has his own band, is desperate for Len's approval. Zoe, a young music sensation whose career was created by Len, comes searching for answers after he humiliated her on stage. Suddenly, Len's solitary retreat is anything but. Then, a shocking event from outside forces him to focus on something other than himself.