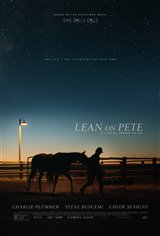 Fifteen-year-old Charley Thompson (Charlie Plummer), whose mom left when he was small and whose father Ray (Travis Fimmel) is mostly absent, finds a job caring for a racehorse named Lean on Pete at the local racetrack.

The horse’s owner, Del Montgomery (Steve Buscemi), fills in somewhat for Charley's father, teaching him table manners and taking him under his wing. Although Pete's hard-nosed jockey, Bonnie (Chloë Sevigny), tells Charley he can't get attached to the horses because they're not pets, Charley soon falls in love with Pete.

Pete is a winner at first, but when he starts to lose, Del decides to sell him. Charley wants to buy him, but he has no money and nowhere to keep Pete. Determined to save Pete, who would end up going for slaughter, Charley loads Pete onto a trailer and heads out aross America to search for his aunt, whom he hasn't seen for years.

Based on the novel by Willy Vlautin.