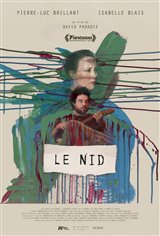 With only some luggage and his digital camera in hand, Pierre-Luc locks himself in the basement of a deserted building for an experiment. A video message sent from his wife Isabelle to his laptop explains the rules of the game.

During each of the five days he’ll be confined to the basement, he’ll have to produce a video for her, in response to the five truths she’ll reveal to him over the same period of time. The purpose of the exercise: to make a film together that will allow them to exorcise a painful past.

But on the second day, a revelation of infidelity causes Pierre-Luc to lose focus on the game. As his resentment takes over, the filmmaker begins to react very badly to being locked up, manipulated, and sometimes even deprived of food. And who is this ghostly firefighter, armed with an axe, who visits him every night?