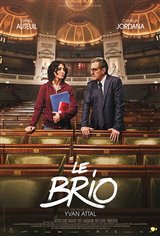 On the very first day of her law studies at the University Paris II, Neïla, a student of Arab orgin, arrives late and unkempt for Pierre Mazard’s seminar. Although she thought she could enter unnoticed, the young woman is instead challenged and humiliated by the sharp-tongued professor.

The other students turn against the teacher and report his racist remarks to the complaints office. In order to avoid firing Mazard, the director of his department forces him to prepare Neïla for a national public speaking competition. Disgruntled, the professor reluctantly accepts this mentoring mission.

For her part, Neïla can’t stand the professor, so will the two be able to put aside their differences in order to cooperate?