Laughing Under the Clouds: Gaiden Part 1 & 2 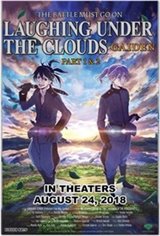 PART 1: One year has passed since the great battle against the "Orochi" (gigantic snake). Kumou Tenka, paralyzed in the final battle and experimented on by the government, is reticent about what happened to him.

Tenka has withdrawn himself from society but his younger brothers, Soramaru and Chutaro, find out the secret past of their older brother. PART 2: The Fuuma ninja clan is a secret ninja tribe that has been waiting for the "Orochi" to resurrect for generations.

This is the story of Shirasu and his twin brother Ichiu who grew up in this vicious environment and how they became the leaders of the clan.