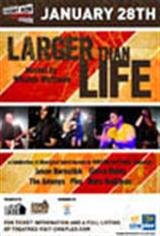 A celebration of Canadian musical talent featuring performances and interviews from Sierra Noble, Plex, Marc Nadjiwan, Jason Burnstick, The Johnnys and more. This incredible event was filmed by Strong Road and presented by Working Title Artists with host Winston Wuttunee at Revival Theatre in Toronto during the week of the 2008 CAMA's.

This two-hour concert film will be presented as a one time exclusive event on the big screen, in high-definition and digital surround sound.