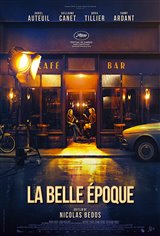 Victor, 70, a once-famous children’s book illustrator and graphic novelist, has lost his inspiration. His wife Marianne is having an affair and their friends have distanced themselves. However, a bright light comes into Victor’s life: Antoine, a friend of his son, has been a huge fan of his work since childhood. To repay his debt to Victor, Antoine, the head of a company dedicated to historical re-enactments for wealthy clients, offers Victor a trip back in time, so to speak, of his own choosing. Nostalgic about the first time he met Marianne, Victor asks to relive the evening of May 16, 1974, where, in a modest Parisian cafe, he laid his eyes on her for the first time. The cafe is recreated at great expense in a studio. Victor gets caught up in the game and falls for Margot, the actress who is standing in for the young Marianne.