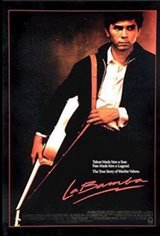 Valens' half-brother Bob Morales (Esai Morales) is a vitriolic ex-con who roars into the migrant camp on his Harley after his release from jail.

Valens' musical talents are encouraged by his family -- though later various members of his family react to his fame with varying degrees of pride and envy -- and he soon earns an audition with legendary record producer and former Artie Shaw clarinet player Bob Keane (Joe Pantoliano).

Valens soon appears in an Alan Freed rock n' roll teen exploitation film, lip-synching his blistering recorded version of Ooh, My Head. When a romance with Donna Ludwig (Danielle von Zerneck) is forbidden by her conservative father, Valens pens the famous ballad that bears her name.

Although not 100% historically accurate, La Bamba is much more accurate than 1978s The Buddy Holly Story. The feature turned a new generation on to the influential Tex-Mex rock that was an inspiration to such later rockers as The Bobby Fuller Four as well as Los Lobos.