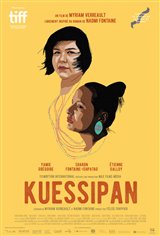 Mikuan and Shaniss, two girls growing up in a Quebec Innu community, have been inseparable since childhood. Their plans to stick together no matter what are put to the test as they approach adulthood. Mikuan, who has writing aspirations, falls for Francis, a white boy from Sept-Îles and begins to dream of leaving the reserve. Meanwhile, Shaniss, already a mother, tries to protect her boyfriend, who is the father of her child, when he’s wanted by the police for assault and battery after an altercation in a bar.