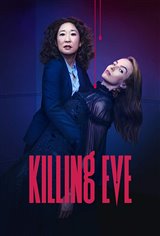 Killing Eve follows two women: Eve Polastri (Sandra Oh) is an intelligent MI5 security officer who is mostly desk-bound, but craves the life of a spy. Villanelle (Jodie Comer) is a clever, unpredictable, talented killer who loves her violent job and the many luxuries she is able to afford because of it. When Eve is assigned the cases involving Villanelle, the two become obsessed with each other, as they go head-to-head in a game of cat and mouse.