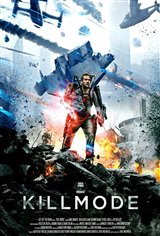 It is the year 2027, eight years after the first outbreak of The Sickness, a highly contagious, adaptive and lethal virus that killed 31 million people. The world is now run by a pharmaceutical corporation called The Company, which distributes a treatment for the virus but charges a high price for it, putting the majority of people in a state of poverty and dependence.

Ex-freedom fighter David Oscar (Dave Mantel), a former member of The Flux, a rebel movement depicted as a terrorist organization in the media, has lost all hope and hides in a small illegal clinic.

After years of hiding from his past, David is tracked down by the remaining members of The Flux, who persuade him to take part in an important mission that they believe will lead to a cure for The Sickness and will destroy The Company, which they believe to be responsible for the disease. When they break into a secure facility of The Company, they discover not a cure to The Sickness, but a young girl called Molly (Julia Batelaan) who has been held captive and subjected to experiments. The rebels decide to help her escape, but they soon realize why she has been kept under lock and key all this time.