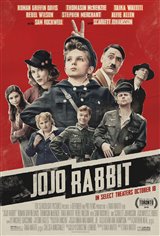 During WWII, Jojo Betzler (Roman Griffin Davis), an awkward 10-year-old boy, lives in Germany with his mother, Rosie (Scarlett Johansson). As members of the Hitler Youth, Jojo and his friends have to learn war games and how to blow things up, but the kids aren't that adept and manage to stab themselves with the knives they're given and blow up buildings that are not meant to be blown up. When Jojo is asked to kill a rabbit but can't bring himself to do it, he earns himself the nickname "Jojo Rabbit."

Discouraged, Jojo seeks solace in his imaginary friend, Adolf Hitler (Taika Waititi), who does his best to encourage the boy, while telling him stories of his own awkward youth. Meanwhile, Jojo discovers that his mother is hiding Elsa (Thomasin McKenzie), a teenage Jewish girl, in their home. Jojo doesn't know any Jews, but has heard they have horns and scales and hang from the rafters like bats. He decides not to tell the authorities, because he knows that would put his mother in danger, so instead he tries to find out all he can about Elsa, in order to gather information about Jews for the Nazis. As he does so, he has to endure Elsa's teasing, who makes quips such as, "Obviously we are demons who love money."