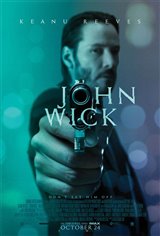 When John Wick (Keanu Reeves) fell head over heels in love with Helen (Bridget Moynahan) and married her, he retired from his life as a top assassin. They enjoyed five happy years together before she died following a lengthy illness.

Following the funeral, he receives a beagle puppy named Daisy as a posthumous gift from his late wife. Taking time to grieve, he bonds with the puppy, who becomes the focus of his life.

Everything changes when a young punk (Alfie Allen) and his friends break into John's home to steal his vintage car. Not knowing who he is in the underworld, they not only beat John up, but they wind up killing Daisy. John is dragged into his old life of violence, determined to seek revenge.