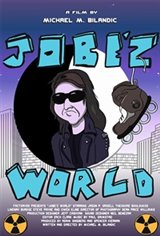 Jobe, a mysterious middle-aged rollerblader, spends his days selling drugs to an eclectic mix of downtown weirdos. When he gets the call to to make a special delivery to his favorite actor he's completely starstruck.

What starts off as an exciting encounter with an A-list celebrity quickly devolves into a nightmarishly comedic trainwreck when the actor dies and Jobe is forced to flee into the night. Afraid and confused, he blades around the streets of lower Manhattan.

Dodging paparazzi, police, a cinephilic doomsday prepper, a disturbed comedian, heartbroken superfans, and his raver roommate, he fights to clear his name - all while entertaining his mom who is visiting from out of town! Jobe'z World is a no-budget descent into the worlds of after hours freakery and existential rollerblading.