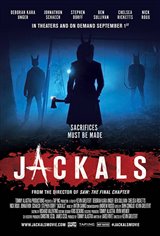 Justin (Ben Sullivan) is kidnapped and captured by two men wearing ski masks. They take him to a secluded cabin, but his family is determined to free him and erase the brainwashing he went through at the hands of the cult known as the Jackals. But the cult isn't ready to let go of Justin just yet.