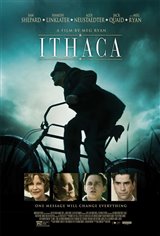 When his older brother Marcus (Jack Quaid) leaves to fight in the Second World War, fourteen-year-old Homer Macauley (Alex Neustaedter) takes on a job as a bicycle telegraph messenger to provide for his widowed mother, his older sister and his younger brother.

Homer delivers messages of love, hope, pain and death to the good people of Ithaca, but soon must grapple with a message that will change him forever. Based on Pulitzer Prize-winning author William Saroyan's 1943 novel The Human Comedy, which was made into a movie of the same name also released in 1943, starring Mickey Rooney as Homer Macauley.