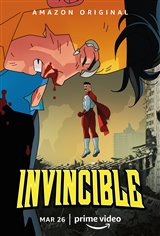 17-year-old Mark Grayson (Steven Yeun) is just like every other guy his age — except his father is the most powerful superhero on the planet, Omni-Man (J.K. Simmons). But as Mark develops powers of his own, he discovers his father’s legacy may not be as heroic as it seems.

Based on the groundbreaking comic book from Robert Kirkman, the creator of The Walking Dead.