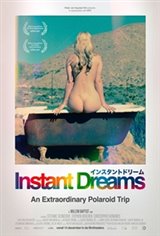 A casualty of the digital revolution, Polaroid instant film and cameras were meant to fade quietly into oblivion when the company stopped production in 2008. INSTANT DREAMS explores the legacy of Polaroid founder Edwin Land through the lives of three enthusiasts and their obsession with the cultural, scientific and artistic significance of instant film. Director Willem Baptist takes viewers on a hallucinatory quest to discover the secret chemical formula, once thought lost, that launched one of the largest companies in the world.