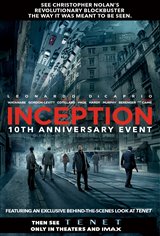 This summer, your mind is again the scene of the crime. In 2010, acclaimed filmmaker Christopher Nolan took moviegoers into the intimate and infinite world of dreams in the Oscar-winning sci-fi actioner Inception.

Now, in celebration of the 10th anniversary of this groundbreaking film, we are re-releasing Inception in theatres, with a bonus of exclusive behind-the-scenes footage from Nolan’s much-anticipated film, Tenet.