In Between (Bar Bahar) 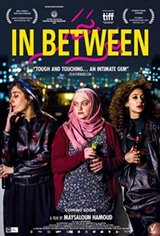 Laila, a successful lawyer, craves the love of a good man who she thinks she's found in the apparently open-minded and handsome Ziad. Salma works at menial jobs in restaurants and bars hoping her long-held dream of being a DJ becomes a reality.

In the meantime she falls for the beautiful trainee doctor Dounia but is forced to keep their lesbian relationship secret from her family. Laila and Salma's hard partying ways initially come as a shock to the more traditional and reserved Nour who is still studying for a degree and seeks a simple life.

She is set for an arranged marriage to fiancé Wissam, seemingly a pillar of the community but who behind closed doors isn't the man he appears to be. The three girls are rocked by a shocking series of events that will push their beliefs to the limit and change their lives forever whilst sealing the bond of friendship.