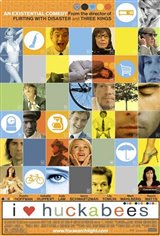 Watch Trailer
Albert Markovski (Jason Schwartzman), head of the Open Spaces Coalition, has been experiencing an alarming series of coincidences the meaning of which escapes him. With the help of two Existential Detectives, Bernard and Vivian Jaffe (Dustin Hoffman and Lily Tomlin), Albert examines his life, his relationships, and his conflict with Brad Stand (Jude Law), an executive climbing the corporate ladder at Huckabees, a popular chain of retail superstores.

When Brad also hires the detectives, they dig deep into his seemingly perfect life and his relationship with his spokesmodel girlfriend, the voice of Huckabees, Dawn Campbell (Naomi Watts). Albert pairs up with rebel firefighter Tommy Corn (Mark Wahlberg) to take matters into their own hands under the guidance of the Jaffes' nemesis, the French radical Caterine Vauban (Isabelle Huppert).