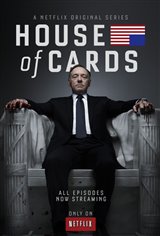 Francis “Frank” Underwood is an ambitious Democratic congressman from South Carolina. He was responsible for ensuring the election of President Garrett Walker in exchange for being appointed Secretary of State. Before he is sworn in, however, the tables turn. The Chief of Staff Linda Vasquez tells him that the president wants him to promote his own agenda in Congress and is going back on their agreement. Angered by the betrayal Frank and his wife plot revenge and seek to gain power.

He begins a plan to disgrace his enemies. Using his affair with Zoe Barnes a young political reporter, he leaks damaging stories about his rivals in the House. Frank blackmails Peter Russo, a troubled congressman from Pennsylvania, into helping undermine Walkers choice for State. He ends up having Senator Michael Kern replaced with his own choice Senator Catherine Durant. Frank further uses Russo to end a teachers strike and pass an education bill improving his standing with Walker.

Due to the fact that the new Vice President was the former Governor of Pennsylvania, a special election will be held for governor. Frank helps Russo get clean and boosts his candidacy. He intends to break his sobriety later on and stage his downfall right before the election. Shifting political fortunes force him to put his plans into action earlier. Frank stages Russo’s suicide after Russo threatens the media about his actions. The Pennsylvanian election is now in chaos and Frank manages to convince the current Vice President to step down and return to his former position as Governor which leaves the Vice presidency open – which was Frank’s plan from the start.