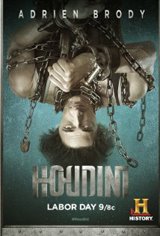 The four-hour scripted miniseries follows the legendary Harry Houdini (Adrien Brody), from his modest childhood, through to his struggle to get out of a life of poverty and achieve fame.

As his career grows he tempts fate more and more by trying new dangerous stunts in order to continually thrill his audiences. Later in his career, Houdini takes on fake spiritualists and engages in espionage.