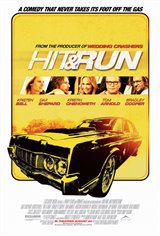 Annie (Kristen Bell) and her boyfriend Charlie (Dax Shepard) leave their small-town lives behind for the excitement of Los Angeles, where Annie is hoping to land her dream job. Their excitement is put on hold though, when Charlie's past comes back to haunt him.

Several years ago, Charlie had taken part in a bank robbery and when his partners ended up killing a security guard, Charlie testified against them. As a former getaway driver turned informant, he was placed in the Witness Protection Program and hidden away in the small town of Milton, California. Everything was going well in his new life until he busts out of the program to help Annie get to L.A.

Charlie is forced to fess up and tell his girlfriend everything about his past when his former gang starts hunting them down. Also on the hunt for them is Federal Marshal Randy (Tom Arnold), who is supposed to be in charge of protecting Charlie.