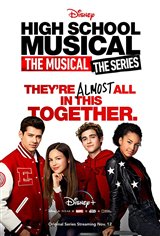 When the new school year begins, Ricky (Joshua Bassett) discovers that telling his girlfriend Nini (Olivia Rodrigo) that they were on a break over the summer was a big mistake. She now has a new boyfriend, E.J. (Matt Cornett), whom she met at summer theater camp.

Ricky decides to audition for their high school musical, High School Musical, so he can try to win her back. Meanwhile, Miss Jenn (Kate Reinders), East High’s supremely spirited drama teacher is convinced that musicals can be lifesavers, while Gina (Sofia Wylie), a transfer student and diehard theater kid, has plenty of secrets.