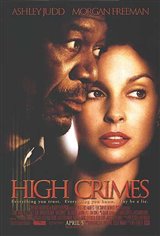 Watch Trailer
High-powered attorney Claire Kubik (Judd) has a thriving career, a beautiful house and a wonderful husband. Her perfect world, however, begins to crumble after their house is burglarized. The crime unwittingly triggers a chain of events that has her husband, Tom (Caviezel), arrested under his true identity, Ronald Chapman, and charged with murdering civilians in El Salvador.

To her horror, Tom admits his real name is Ronald Chapman, and that he was part of the clandestine operation that did result in a massacre. But, he assures her that he is innocent and that the real perpetrators made him their fall guy because alone, he can't identify them as the ones who gave and executed the order.

Prepared to stand by her husband, she decides to defend Tom in a secret military court. But the rules of this legal system are unfamiliar to her, so she enlists the help of Charlie Grimes (Freeman), a former military attorney who relishes the opportunity to take on the very hierarchy that disgraced him years earlier.

Based on the novel by Joseph Finder.