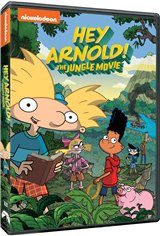 Arnold and his best friend Gerald make a humanitarian video in order to win a trip to  San Lorenzo, Argentina, where Arnold's missing parents were last seen. In the video, the two boys film themselves making a shelter out of junk for a friend, but when some homeless people dismantle it, Arnold is left disheartened.

However, his friend Helga uses footage she's captured over the years of Arnold doing good deeds and shows it to everyone. Not only that, but Arnold's teacher announces that Arnold's video has won the contest. Arnold, his classmates and his teacher all go on a trip to the jungles of Argentina, where Arnold hopes to fulfill his longtime dream of finding his parents.