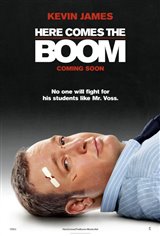 Scott Voss (Kevin James) is a biology teacher who's become bored. Although he was named Teacher of the Year 10 years earlier, he couldn't care less about his job and frequently shows up late at the high school where he works. The school, which is operating at a deficit, cuts all extra-curricular activities in a bid to save $48,000. The cutbacks put the music teacher's (Henry Winkler) job in jeopardy, but Scott has a plan to raise the money.

A former college wrestler, he decides to become a mixed martial arts fighter after hearing that they can make $10,000 per fight. Most of his colleagues think he is crazy, especially the school nurse Bella (Salma Hayek), on whom he has a crush. Despite many setbacks, Scott manages to rally the entire school around him.