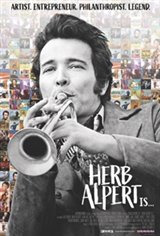 With his trumpet he turned the Tijuana Brass into gold, earning 15 gold and 14 platinum records; He has won nine Grammys Awards between 1966 and 2014, and received the National Medal of Arts from President Barack Obama in 2012.John Scheinfeld's documentary "Herb Alpert is..."profiles the artist, now 85, mostly from the perspective of colleagues like Questlove, Sting, and Bill Moyers.

In their words, the shy, unassuming trumpeter is a musical, artistic and philanthropic heavyweight.