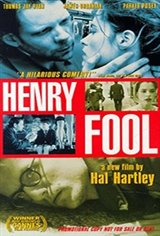 This black comedy plays with the fuzzy boundaries between fame and infamy, renown and revulsion, mentor and protege. Henry is a literary legend in his own mind who meets Simon, a trash collector with a self esteem so low a dwarf couldn't limbo underneath it.

After taking Simon's money, freeloading in his house and sleeping with his sister, Henry convinces Simon he's a poet. Following numerous bile-laced rejections, Simon does indeed get published and becomes an instant celebrity.

He uses his new-found fame to negotiate a deal that will finally see his mentor's work get published, but when he actually reads what Henry's written he's so struck by how bad it is that he backs out of the deal.