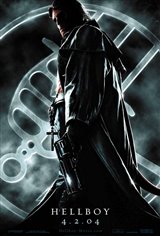 Born in the flames of hell 60 years ago during World War II, Hellboy (Ron Perlman) was brought to Earth by evil madman Grigori Rasputin (Karel Roden) to perpetrate evil. Destined to be a harbinger of the apocalypse, Hellboy was rescued by Allied Forces led by Professor Broom (John Hurt), founder of the clandestine B.P.R.D. (Bureau for Paranormal Research and Defense), who raised him like a son and developed his extraordinary paranormal gifts. Despite his dark origins, Hellboy becomes an unlikely champion of good, battling the evil forces that threaten our world.

At the B.P.R.D., Hellboy becomes part of an unlikely family that includes the telepathic "Mer-Man" Abe Sapien (Doug Jones) and Liz Sherman (Selma Blair), who is pyro-kinetic. Hidden from the very society they are assigned to protect, they stand as a key line of defense against Rasputin - who seeks to reclaim Hellboy to the dark side and use his powers to bring about Armageddon. As Broom says of the B.P.R.D., "Make no mistake about it, there are things out there that go bump in the night. We're the ones who bump back."