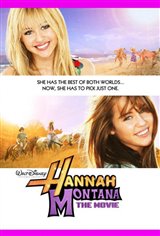 Miley Stewart's (Miley Cyrus) life is out of balance. Taken under the wing of a gungho and glamorous publicist, Vita (Vanessa Williams), Miley's letting Hannah begin to dominate her life. When she keeps choosing Hannah over her commitments to family members—to say goodbye to Jackson (Jason Earles) as he leaves for college, to attend Lilly's (Emily Osment) long-anticipated sweet-16 party or her grandmother's birthday celebration—it is clear Miley's beginning to forget why the Hannah Montana secret was created in the first place.

When Hannah Montana ends up in a paparazzi-captured fight with Tyra Banks over a pair of designer shoes, Miley's father (Billy Ray Cyrus) quietly takes control. Having attempted to reason with her to no avail, Robby Ray tricks Miley into thinking she's going to New York as Hannah to perform when he's really taking her from Los Angeles back home to Crowley Corners, Tennessee. Miley's double life becomes even more complicated when she returns to Crowley Corners.

She discovers that a reporter has somehow managed to track Hannah Montana to her hometown and is asking lots of questions of the locals. She also meets up with an old childhood friend, Travis Brody (Lucas Till), and soon finds herself in her first serious romance. When Miley tries to impress Travis by telling him about her friend Hannah Montana, she suddenly finds her alter ego enlisted in a concert fundraiser to help save her hometown's pristine Crowley Meadows from developers. Once again, having taken on more than she can handle, Miley has to call on her best friend, Lilly, and ask her for help. When Lilly finally arrives in Crowley Corners pretending to be Hannah Montana, events really spin out of control.