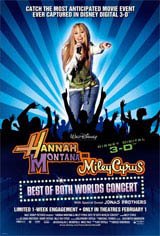 Fans of the hugely popular Hannah Montana TV show have the chance to experience the thrill of a front row seat to see their favorite singer, songwriter and actress, Miley Cyrus, perform her nationally sold-out Hannah Montana & Miley Cyrus: Best of Both Worlds Concert on the big screen with this very special Disney Digital 3-D presentation.

Shot during her 69-city, standing-room-only concert tour, the film brings a whole new dimension to the pop idol, as state-of-the-art 3-D captures up close, and with stunning clarity, the music, persona and inside world of both Miley Cyrus and her rocking alter ego, Hannah Montana. With rapidly rising stars, Jonas Brothers, as her special guests and a stage filled with dancers, pyrotechnics and video imagery.

The concert showcases the exuberant magnetism that has led the 15-year-old singer and actress to become a multimedia sensation and attracted legions of fans all over the world. In addition to its viscerally real concert footage, the film includes a "backstage pass" peek at Miley's life on tour.