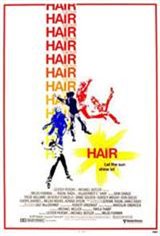 Milos Forman's adaptation of the tribal rock musical Hair stars John Savage as Claude, a quiet young man from the Midwest who becomes friendly with a group of New York hippies on his way to begin basic training in the military. The repressed Claude is quite taken with Berger (Treat Williams) and the group of freedom seekers who reside in Central Park.

The group encourages Claude to go after a debutante named Sheila (Beverly D'Angelo). Legendary choreographer Twyla Tharp masterminded the dances, which attempt to flow from the natural settings of the film.

The film includes most of the more famous songs from the original play, including Donna, Aquarius, Easy to Be Hard, Let the Sunshine In, Good Morning Starshine, Frank Mills, and the title number.