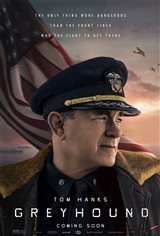 During World War II, in the winter of 1942, Navy officer Commander George Krause (Tom Hanks) is given command of a Navy destroyer. He finds himself in charge of leading an international convoy of 37 Allied ships across the treacherous North Atlantic while being hotly pursued by a wolf pack of Nazi U-boats.

Based on the novel The Good Shepherd by C.S. Forester.

The film will no longer release theatrically, after being purchased by Apple TV+. A release date has not yet been set.