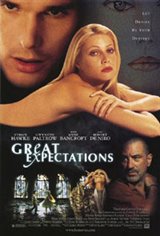 Alfonso Cuaron (The Little Princess) directed this Mitch Glazer screenplay, a modernization of the 1860-61 classic by Charles Dickens. Some situations in the film are presented as memories -- the way the central figure, Finnegan Bell (Ethan Hawke) recalls events many years later.

At a Florida fishing village, eight-year-old orphan Finn Bell (Jeremy James Kissner), talented at art, is left in the care of his sister and her husband, Joe (Chris Cooper). One day, Finn helps a chained, escaped convict who appears in the surf.

On other days, he visits Paradiso Perduto, where he plays with young Estella (Raquel Beaudene), niece of the mansion's colorful, flamboyant, and extremely wealthy owner, Ms. Dinsmoor (Anne Bancroft), who parallels the novel's tragic Miss Havisham, a woman jilted at the altar and left emotionally scarred and mentally imbalanced.

As Ms. Dinsmoor watches Finn draw a portrait of Estella, she plots to mold Estella into a hard woman capable of destroying men.

In a flash forward to the '90s, Finn (Hawke) and Estella (Gwyneth Paltrow), now in their late teens, re-create the water-fountain kiss of their childhood, but Estella vanishes, breaking Finn's heart to such a degree that he doesn't draw or paint for seven years, choosing to eke out a marginal existence with his uncle Joe (after Finn's sister abandons the two).

Then Manhattan art representative Jerry Ragno (Josh Mostel) turns up with a startling offer -- if Finn will return to painting and relocate in New York, Ragno will give him a one-man show.

With an apparent assist from Ms. Dinsmoor, Finn makes the move and begins his new life with great expectations and a deadline of 10 weeks to complete the necessary paintings. When Finn next encounters Estella, she has a wealthy boyfriend, Walter (Hank Azaria).

As Finn once again becomes entranced by Estella, he also begins to question exactly how his life is being manipulated. Francesco Clemente did the paintings and drawings seen in the film. Shown at the 1998 Sundance Film Festival.