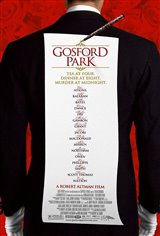 It is November, 1932. Gosford Park is the magnificent country estate to which Sir William McCordle and his wife, Lady Sylvia, gather relations and friends for a shooting party. They have invited an eclectic group including a countess, a World War I hero, the British matinee idol Ivor Novello and an American film producer who makes Charlie Chan movies. As the guests assemble in the gilded drawing rooms above, their personal maids and valets swell the ranks of the house servants in the teeming kitchens and corridors below-stairs.

But all is not as it seems: neither amongst the bejewelled guests lunching and dining at their considerable leisure, nor in the attic bedrooms and stark work stations where the servants labor for the comfort of their employers. Part comedy of manners and party mystery, the film is finally a moving portrait of events that bridge generations, class, sex, tragic personal history - and culminate in a murder. (Or is it two murders...?) -- © 2001 Odeon Films