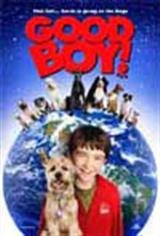 12-year-old Owen (Aiken) has been working as a dog walker all summer and his hard work has finally paid off – his parents (Shannon, Nealon) are letting him adopt a dog of his own! Owen gets more than puppy love, however, when he discovers his new dog, Hubble (Broderick), is actually an interplanetary scout from the Dog Star Sirius.

Owen learns that thousands of years ago, dogs from Sirius came to colonize and dominate Earth, but the dogs strayed from their original mission and have instead become “man’s best friend.” Hubble has been sent to investigate. Now Owen must help Hubble train a group of undisciplined neighborhood dogs to shape up for a visit from their leader, the powerful Greater Dane – and the fate of all Earth dogs hangs in the balance.