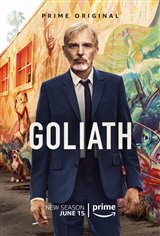 In the first season, McBride is divorced, living out a hotel room, and no longer a part of Cooperman McBride, the prestigious firm he and his former law partner, Donald Cooperman (William Hurt), founded together. He spends the majority of his days binge-drinking and half-heartedly taking on petty legal cases before he is approached by a young attorney named Patty (Nina Arianda). Patty convinces him to help her with a wrongful death lawsuit that would put him up against his old firm. He eventually agrees to take it on, once he realizes this case goes much deeper than originally thought. Now, McBride must put aside his bruised ego and pull himself together so he can win what will surely be the biggest case of his career.

Created by the collaborative team of Jonathan Shapiro and David E. Kelley, Goliathdepicts Billy McBride, the David to the legal system’s Goliath, as he fights the impossible fight for justice in a system that seems to no longer care what the truth is.